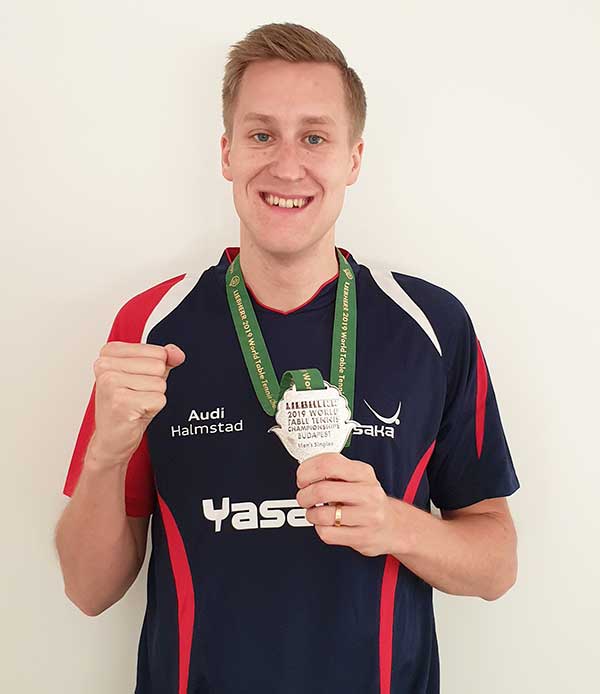 In the current World Championships in Budapest Yasaka player Mattias Falck managed through an outstanding achievement to reach the final in the Men’s singles and become the silver medalist.

Mattias qualified for the men’s singles quarter final by beating the Korean player Lee Sangsu, World ranked no. 6. Mattias won the match with 4 – 1 in sets.

In the quarter final Mattias played the French number one, Simon Gauzy. Mattias showed a lot of power and self-confidence and won quite comfortable, 4 – 1 in sets.

With the victory in the quarter final Mattias secured a medal. It is the first Swedish medal in men’s singles since Jan-Ove Waldner took the bronze medal in 1999.

In the semifinal Mattias met the young rising star An Jaehyun of South Korea. After a very hard and thrilling match Mattias finally won, 4-3 in sets. He is now the first Swedish player since 1997 (J-O Waldner) to reach the men’s singles final.

In the final Mattias played against Ma Long, China, the two times World Champion (2015 and 2017). Ma Long took the lead with 2-0 in sets before Mattias could win the third set. In the fourth set Mattias continued to put pressure on Ma Long by leading 9-7. However, Ma Long could come back to win the set 11-9 and then he also won the fifth set and the World Champion title.

For Mattias the silver medal in the World Championship is a big success and it will help him to improve his confidence and his motivation for future challenges.

Mattias has been a Yasaka player since he started to play table tennis. In June 2018 Mattias and Yasaka signed a new contract, valid for four years.